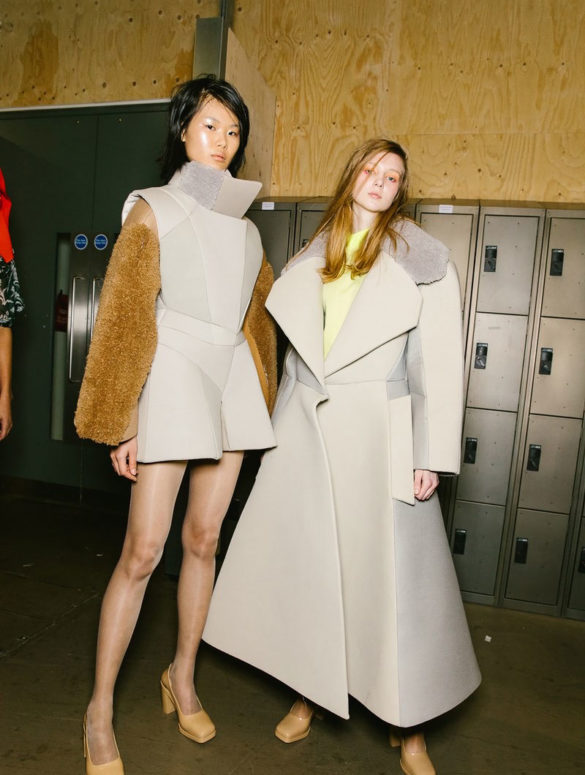 Alek Lassement Gives the Industry a Playful Look into Power

Shammi connected with the Central Saint Martins womenswear graduate in lockdown to find out more about his future plans.
The images you’ll see throughout the interview have been provided by Aleksandar.

Aleksandar Mitrovic, ‘Alek Lassement’, ended a “tough and gritty” seven years of education with his CSM final graduate show as an embodiment of his upbringing, escaping the Yugoslav civil war for Canada at a young age.

Alek started his university life in Canada studying Economics. However, soon after he enrolled at Vancouver Community College to study fashion design, realising he had to commit to his heart and his deep routed passion for fashion, emphasising his obsession with luxurious femininity and reiterating his drive to become a womenswear designer. After completing his degree at VCC, he ventured out to the fashion royal house of Central Saint Martins and was accepted into the foundation program – Alek jumped at the opportunity delving into the new culture, and location, finding his feet in his own creative thought process.

After seven long years of hard work, Alek’s final graduate collection was a culmination of his tenacious work rate in such a small space of time. The collection certainly provided an innovative look into the ‘female power-suit’ in the form of military coats that are beautiful structured through panels bonded into a self-standing foam dress. Patches of detail were constructed out of carpet, referencing paternal power with a nod to his father’s old job in a carpet store. Regardless of the exploration of power, Alek doesn’t want us to intellectualise his work too much, and to just enjoy it!

Not only have his experiences inspired a boldness in his personal style, they have also permeated his work from the get-go, with a clear distinctive shape in his garments – uniquely constructed. His boldness is quickly gaining press attention, with Alek’s avant-garde clothing hitting major approval of female power royalty Rihanna, when she draped his tutu headpiece from an earlier graduate collection for a Savage x Fenty by Rihanna photoshoot. He’s clearly doing something right.

With the current situation for graduates out of university struggling to find the next move, it couldn’t be a better moment to speak to Alek on this topic and talk about local identity and heritage, the influence CSM has had on his life and his future endeavours in the fashion industry.

For those that do not know who Alek Lassement is, could you just give me an outline of your background and heritage?

My family started off living a very humble life in former Yugoslavia, in the country which is known as Bosnia and Herzegovina. This was where I was born in 1989. At the age of 3 my family and I had to escape the country due to the civil war. We were a Serbian family in a mostly Muslim and Croatian neighbourhood, which was a problem. I grew up in Vancouver, Canada, which was a slightly alienating experience. I learnt English through watching the TV yet I never really fit in with my classmates due to being foreign.

After high school I actually went to university at UVIC in Canada with an Economics major and I dropped out a year after I just became obsessed with clothes. I developed a new insight about myself in that year and realised how interested I was in products as a child. I then took a year off and worked random jobs and just tried to live. After that time, I enrolled at Vancouver Community College to study fashion. Post VCC, I applied for the Central Saint Martins BA and was accepted into the foundation program.

London has been an incredible experience and was mind blowing with how exciting it was – people who are from London do not know how lucky they are. During uni, I interned at several brands: Mary Katrantzou, JW Anderson and Jacquemus among others. I really chose this route because I just became obsessed with clothes in general and realised I was the same as a child. When I was around 6 I wanted to be a bra designer and also wanted to design baby strollers.

I needed a pause after 7 years of uni and this pandemic has offered me one.

How have you found this global pandemic in lockdown? Could you outline what your day to day routine working from your home studio has been like?

To be honest, I have used it to get away from fashion and get my life and health together. I needed a pause after 7 years of uni and this pandemic has offered me one. I have just done some work on my portfolio over the break and developed other interests apart from fashion. I don’t think I can safely describe my day to day routine as I don’t think I have one defined yet – hopefully I will have one defined after my trip to Canada.

It just gives me unlimited freedom. It especially did when I first started fashion.

You released your MA collection early on this year. Could you talk me through the message you wanted to convey for this collection and your design process? When sourcing and reconstructing materials to craft some beautiful powerful designs, one that stood out for me was the foam shearling jacket and foam mini skirt.

I didn’t have a specific message, I wanted it to be defined by the viewer. I did have references and those came from my own interests and nostalgias, but I kept them very obscure within the pieces. It was a wide array inspirations including 90’s office culture, anime, early electronics and sources of power.

The process became the message in a way – it was developed from a bonding technique I created during the pre-collection. I used knit fabric stretched over varying thickness of foam to create flat planes that can add dimension within the garments. The foam adds a level of stiffness, softness and protection. I did focus on creating a wardrobe in a way. I took the basic idea of a pair of jeans and applied this technique to them – I wanted the essence of the original garment to be interpreted through this medium.

I think my origins have almost everything to do with how I work.

You have described your MA collection as “quite severe”. How did your heritage – specifically being a Serbian native – inspire you in this collection?

I think my origins have almost everything to do with how I work. The imagery of war, the severity of the architecture and imprint of a broken ruling hierarchy have all affected me in some way. The angles I use are all very sharp and brutal, with the colors being mute and minimal. The garments I reference tend be serious themselves with very minimal adornment. I’d like to think of it as a positive way to interpret that time.

Coming out after seven long years at CSM, I bet the last thing you thought would happen is a global pandemic!  How have you been coping with everything being all digital at the moment in lockdown? Has it been hard for you as a designer in conveying the message of your work digitally, or has it been something which has given you time to reflect on your work and the industry as a whole?

I was really shocked by what happened and how it affected me personally. I was really hoping to just jump into the industry and find work as quickly as possible. That’s almost impossible now and will only take a longer time. I completely understand that and have been focusing on my portfolio and just being patient. It’s always difficult to convey your work digitally, but it’s something you need to work on. I have enjoyed the time to reflect and it has given me numerous other interests that I am excited about. Seven years has been very long and I have enjoyed and embraced not worrying about due dates among other things.

I was really shocked by what happened and how it affected me personally. I was really hoping to just jump into the industry and find work as quickly as possible.

How have your experiences of interning at Jacquemus and JW Anderson shaped you as a designer today?

Fane Redefines the Minimalist Ideal with Its Sensual Handbag Collection

Oh, both of them were great experiences. My position at JW Anderson was working with the 3D designer, which meant that we worked on the stand the majority of the time. This was really helpful for me in the development of clothing. I got to learn how to work with a mannequin and create a look out of basically nothing.

The benefits of Jacquemus was the fact we worked in a very small team at the time. I was heavily relied upon and this gave you a sense of pride in your work. The conditions were quite intense in the studio, but the learning curve made it exciting. I was also very close to Simon and the rest of the team. I learnt a lot there and will always cherish the experience.

Who would be the dream brands/artistic creatives you’d love to collaborate with in order to push your work and the message of your brand further?

I mean, some brands I admire right now are Y-Project, Jil Sander and Loewe among others. However, I would love to maybe work with other CSM alumni like Nensi Dojaka and Charlotte Knowles at some point in the future.

What’s next for Alek Lassement?

I’m currently in Canada, in quarantine, waiting to apply for my visa to come back to London. I’ll be applying for jobs and I think I might just start making a few small things on my own to advertise on Instagram. More wearable things that people can buy direct from me, I actually have a logo now and everything.

Shammi Popat (@shammipopat) is a London-based fashion writer and stylist. He is interested in rethinking modern day style with an eye for detail and child-like curiosity for the future of fashion. Read all of Shammi’s pieces here.