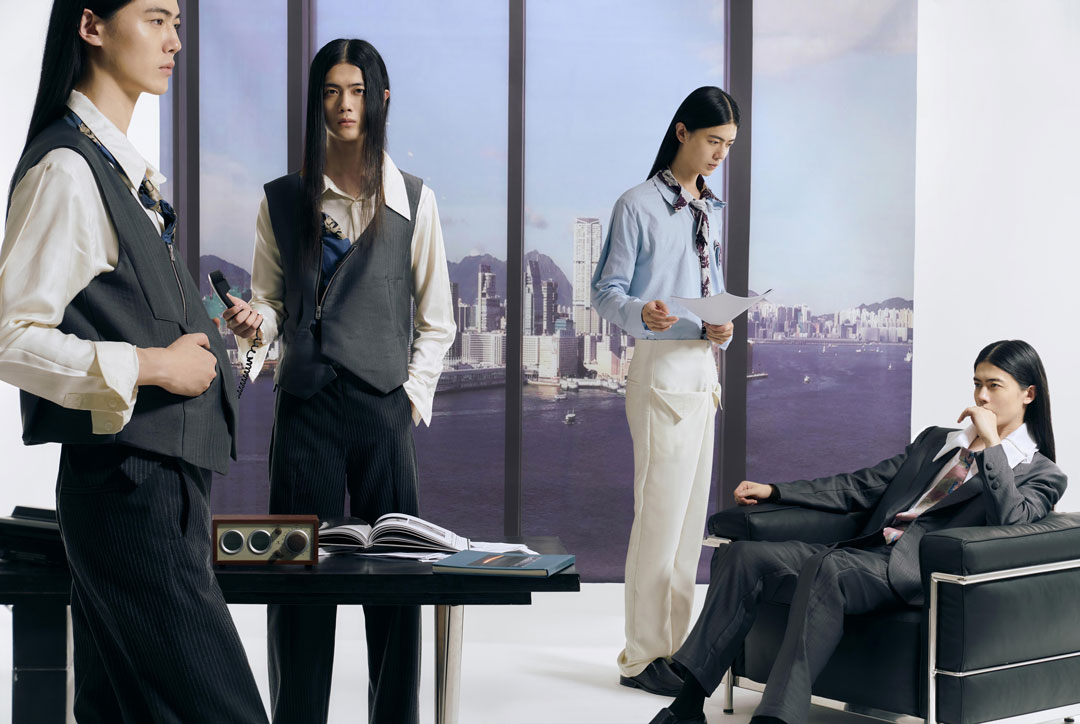 Minghao Tang graduated from London College of Fashion in menswear design whilst interning with designers like Per Götesson, Daniel w. Fletcher and Chalayan. He’s currently studying at UAL for a Master’s Degree in pattern cutting – a logical path if you consider the pattern manipulation from his graduate collection “Nonsense makes sense”.

Inspired by the Cantonese culture that Minghao grew up with. It focuses on Mo Lei Tau, a type of humour associated with popular culture in Hong Kong and mostly featured in movies in the 1990’s. Embodying the concept of Mo Lei Tau into menswear design, he manipulates the garments that commuters typically wear, adding convenience to people’s lives while also maintaining an element of fun. Here, he talks about the influences behind his graduate collection and how he’s pushing the boundaries of dress codes by creating specific garments that can be worn for a wider variety of occasions.

“Stephan Chow was a pioneering actor of the Mo Lei Tau movies during the 1990s. The movies parody the commuter lifestyle both at work and play. They show how commuters overcome their daily challenges in areas such as social conformity and authoritarian workplace environments. I am inspired by the costumes and how they become more exaggerated as the plot develops. During the design development, I remembered a scene from Tricky Brain where the main character found it a struggle to quickly change from his pyjamas into his work wear. I thought about ways in which the character could have changed quicker and how I could experiment with this transition. This led me to mix and match pyjamas with essential work wear such as a suit jacket and tie.”

“I enjoyed reading comic books during my childhood days. Old Master Q by Alfonso Wong was one of my favourites. It illustrates the lives of Hong Kong citizens at the time using Cantonese cultural references. Stories involve people from all walks of life including politicians, businessmen and beggars. Things always turned out well in the end – usually in a humorous and exaggerated way. Some may think that comic books are just for a laugh, but I asked myself:  ‘why can’t I interpret this kind of Mo Lei Tau in my collection?’. I tried to represent the comic effect in my practical design ideas. One memorable scene features Master Q poking fun at a pedestrian who is wearing a pair of bloomers. Master Q inflates the bloomers with an air hose. I was intrigued by how the trousers would look after the explosion. I used this scene to experiment with patterns for a pair of trousers which produced some unexpected shapes that were featured in my designs.”

Local culture during my upbringing

“Hong Kong culture was a big part of my childhood. I remember the cover art from my parents Cantopop CD collection. The singers were dressed up in western fashion styles and wore the most flamboyant costumes. I am fascinated with this retro aesthetic which had an influence on the style ideas for my final collection. My parents and I also made regular shopping trips to Hong Kong from our home on the mainland. The architecture, street scenes and public transport all appeared to me as a fusion of east and west. Around this time, Hong Kong had more international fashion labels than the mainland such as Esprit, Bossini and Giordano. I remember buying clothes from Esprit and people back home would remark on how exotic they were. My BA collection is inspired by my memories of Hong Kong and how the city has changed since.”

A selection of Cantopop covers from Minghao Tang’s parents collection

Soup: Deconstructing and Reusing with the Berlin-Based Fashion Label

Photography from the 80’s

“My favourite photographers from this period are Michael Wolf and Wing Shya. Michael Wolf’s work captures subtle objects in Hong Kong, such as laundry hanging from balconies or mops drying in the streets. I like how he created connections between these framed objects and turned them into a form of art. Wing Shya had an influence on the colour palette for my final collection. I am inspired by his use of cinematic and contrasting colours. When I look at his photographs, I can feel the mood of the characters and the story behind them.”

“I enjoy browsing in vintage shops and taking pictures of any unusual details on the garments. I find it fascinating how these details evolve over time or go out of fashion altogether. This introduced a retro vibe into my garment range such as the bat-sleeve office shirt. I tried to combine vintage shapes with sporty details such as replacing buttons with zips. It adds convenience for the wearer and also gives the garment a fresh finish.”

“Moving to London for the first time was an exciting experience but also had its challenges. I come from a small town where the pace of life is much slower. I began to notice what commuters were wearing before and after work, I was curious how their garment choices reflected their occupation and workplace environment. This encouraged me to design various outfits that were appropriate for both work and leisure. I felt it was important that the overall look had an element of fun.”