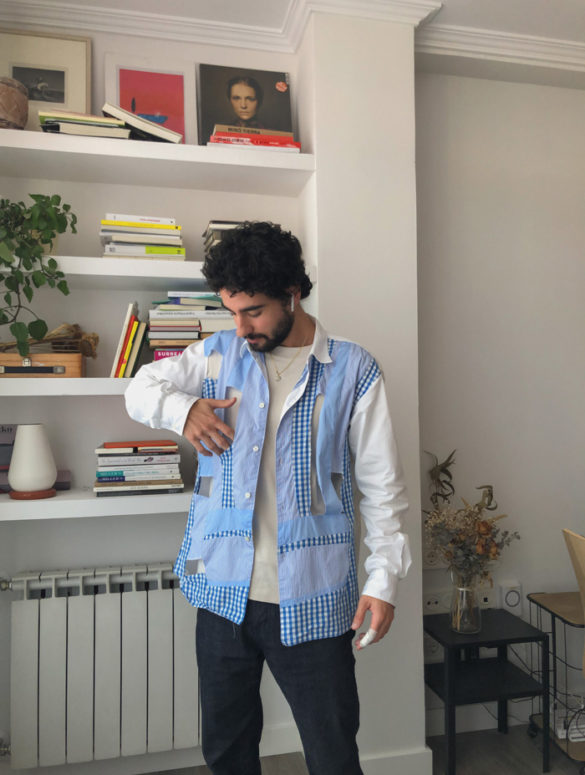 The pair of jeans folded and hidden at the back of your closet, the top with the tag still on or the formal shirt you can’t quite find an occasion for – why have we never worn some of the clothes we own? ‘Never Worn’ explores impulsive buying one garment at a time, as told by its owners. No judging or shaming, but a way to understand this behaviour and, together, make more conscious future decisions.
If you’d also like to share the story behind that garment you’ve never worn, drop us an email at hello@fitstruetosize.com!

David Mola shares the story behind his patchwork shirt.
David is from Donostia, Spain, and is 27 years old. Currently, he works as a cultural manager at Harreman, alongside his job at Paname lore-estudio, a floristry that he opened with his business partner in the centre of Donostia in March 2021.

What garment you’ve never worn have you chosen from your closet? Can you describe it?

I’ve chosen a shirt by Commes Des Garçons. It’s a blue and white toned shirt that has been constructed as if it were patchwork.

When did you buy it?

I bought it in 2018 from an online store, a designer clothing outlet.

What were the reasons that made you buy it?

I really liked it when I first saw it, and from what I could find on the internet, the price was really good compared to the original, so I thought it was a good opportunity.

Do you remember what you felt the moment you bought it?

To be honest, I don’t remember exactly how I felt, but surely I was anxious to have it immediately, and with regrets about wasting money.

Do you consider it an impulsive buy or was it something you thought about for a while?

This was definitely an impulse buy. It was on sale and I fell for the trap. Normally I think a lot about what I buy… the majority of the time I think about what I might buy so much that I end up forgetting to buy it.

Why haven’t you worn it?

I think I’ve always considered it to be a special piece, and I really like white shirts, but I get a certain anxiety thinking that I’ll stain them, so I choose not to wear them. I don’t really have any logical motivation behind it as you can see.

Have you had any moment in which you were about to wear it but then changed your mind?

There’s been many, and these moments only make the guilt worse for having bought something that you don’t wear.

How did you feel when you wore it for the photograph shown here?

I felt like I needed to iron it (which wasn’t easy because I never iron), and at the same time, I asked myself why I never wear it.

If you haven’t worn it, why haven’t you given it away for recycling or to be worn by someone else?

That’s a good question. Normally when I don’t wear something and I think it’s valuable and in good condition, I’ll sell it. But this piece has been forgotten in a closet and I almost didn’t remember that I had it.

Do you think you will start wearing it after answering these questions?

It’s possible, I’ve surprised myself putting it on after so long.

What other garments from your closet have you never worn?

Two come to mind, two coats: one is made of leather and by Schott (which was my father’s), and another that doesn’t have a label, made of wool and that I bought second hand. They’re both gorgeous, but… I always find some kind of excuse to not wear them.

What will you do next time you go shopping to prevent a similar situation happening again?

I’ll definitely remember this interview when I consider if I really need a garment or not.

Elliott Papazahariakis (@papazahariakis) is a writer currently based in Adelaide, Australia. Read all of Elliott’s pieces here.