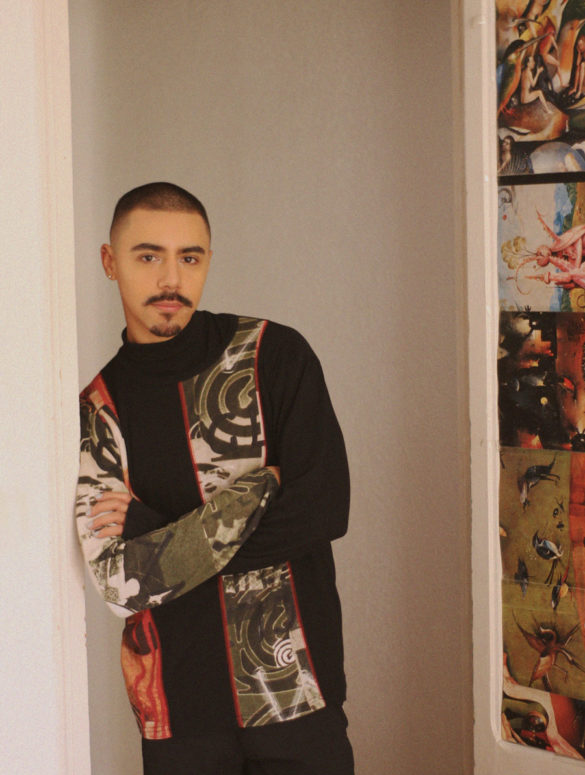 In the Closet
·5 min read

In the Closet with DJ and Producer Torvvic

Victor is a DJ and Producer based in Madrid who goes by Torvvic. Originally from Texas, he also works for a music PR agency and electronic music record label as a PR Manager. In 2018 he started a club night called Pay It No Mind which takes inspiration from the underground queer scenes of the cities he visits, most notably in the way they create safe spaces for humans of all kinds and where they are free to be who ever they want and wear what ever they want.

We asked Victor to select the pieces from his closet that have a special meaning for him. Here, he shows them to us while his latest mix plays in the background.

These are the clothes that Torvvic wears and the stories behind them.

All photos by Pelayo Salor

“This is one of those extremely rare moments in fashion where you come across something that is so perfect. Perfect in the sense of style, fit and uniqueness. Well, that moment was in Amsterdam at the Waterlooplein Flea Market. Haggling skills came into play, as always, even though I was ready to pay full price. The seller said it was the official jacket for the Dutch racing team and I haven’t fact checked that but I thank the fashion universe gods for directing me to this gem that I’ll hold on to forever.”

“Wouldn’t be a Victor style edit without a nod to Y2K. I grew up in the 90’s but I was absorbing pop culture in the 2000’s. I’ve always liked to experiment with different styles and it’s hard to pinpoint one or two or even three styles to describe me but I would say that western wear and Y2K fashion have remained references for me throughout my journey. I try to incorporate touches of each, even in the tiniest details, especially when it comes to eyewear. For me, the absolute best styles of glasses came from the 2000’s. My faves are these Miss Sixty, Dior, and Gucci ones.”

“I went through a preppy phase in middle school. I went through various phases, but in 7th grade prep was all the rage. These used to be a pair of jeans that I probably wore every day that year. They’re kind of a Sisterhood of the Traveling Pants moment cause they have fit me at every stage of life. I mean, I guess I did get a little bit taller which is why I cut them into shorts.

These have been with me for 16 years (this is the first time I’ve done that math and WOW). They’ve seen me at my best and worst; one time I went to pick up a dresser from my ex-boyfriend’s house and as I bent down to pick it up they ripped down the back. In front of him and his family. So I had to load all my stuff into the car, walking around with this giant hole in my shorts. It was funny but definitely not a “best” moment. I took them straight to the tailor to fix so now they have this long stitch on the back. Never parting with these.”

“Everyone needs a pair of party pants. These tie dyed corduroy ones are that for me. Copped them from a Buffalo Exchange discount rack. I feel like a Bratz doll would wear these and that makes me proud.“

“Bought this in a vintage shop in Brick Lane in East London. I actually left this wool beret in an Uber on a wild night when I also left my jacket at the after. I also lost my house keys somewhere that night (oopsie). It was one of those nights when I can’t remember a moment that I wasn’t dancing. Well, this is one of my all-time favorite articles of clothing so I was quite depressed cause I thought it was lost forever. Definitely wasn’t going to find one that fit my head just right like this one. Thankfully, my friend was able to meet with the Uber driver to get it back, which is rare. Lucky me. I wear this a lot during colder months and I do not wear it on nights out anymore.“

“I would say that 60% of my wardrobe is second-hand or thrifted and a majority of the other 40% of my fashion that isn’t second-hand would be my shoes. It’s hard to find a solid pair of thrifted shoes that are 1. really cool and 2. happen to be in your size. It’s always one or the other but rarely both. Plus, shoes mould around the foot after some time so someone else’s shoes really aren’t meant to fit your foot.

I will say that when I do buy from fast fashion I try to buy from special collections, limited editions, and collaborations. I came across these snake print leather boots at H&M. They were part of the Studio Collection a couple of years ago. I feel like I’m back in Texas when I wear these. They remind me of the flashy cowgirls of the west. In reality, I am a flashy cowgirl of the west.“

“I stole this from my dad. He’s the one with impeccable taste in music and my mom is the one who is musically inclined. They’re the ones to thank for giving me a little bit of each of those. This sweater is a piece of them and also an excuse to rep my hometown. It’s got this unmatched level of comfort and perfectly worn out fade, I wear it so much the embroidery is starting to unravel.“