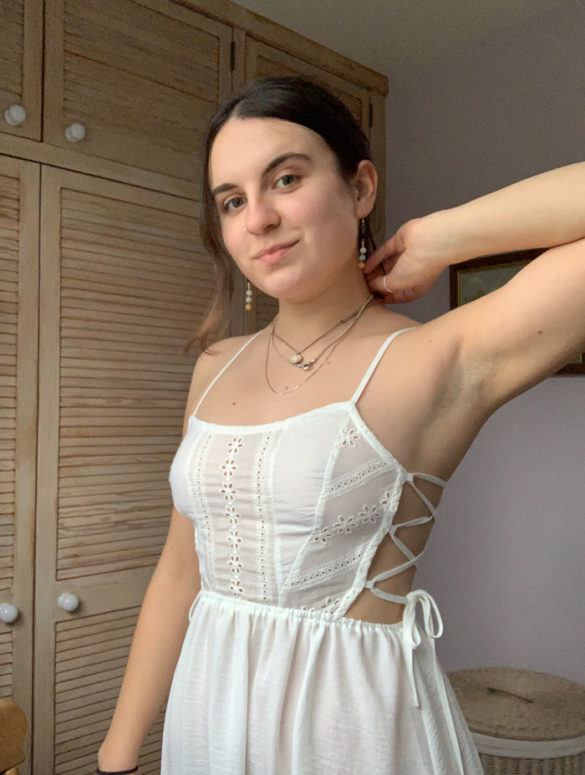 In the Closet
·6 min read

The pair of jeans folded and hidden at the back of your closet, the top with the tag still on or the formal shirt you can’t quite find an occasion for – why have we never worn some of the clothes we own? ‘Never Worn’ explores impulsive buying one garment at a time, as told by its owners. No judging or shaming, but a way to understand this behaviour and, together, make more conscious future decisions.

If you’d also like to share the story behind that garment you’ve never worn, drop us an email at hello@fitstruetosize.com!

What garment you’ve never worn have you chosen from your closet? Can you describe it?

It’s a beautiful white summer dress. It has spaghetti straps, flower pattern detail in the body and open sides, with a white thread lacing them together. It cinches in slightly at the waist with elastic and the skirt is floaty.

When did you buy it?

I think it was in early 2018. I remember it was in my third year of university, so it was probably as I was beginning to make summer plans and getting excited for the clothes I might soon be able to wear

What were the reasons that made you buy it?

I love wearing dresses in the summer. Well, I love the idea of them, and I love to see them on other people. Summer dresses are such pretty pieces and they make me think of those days where it’s so warm that you don’t need any other layers and you can feel the sun on your skin.

I thought this dress was really delicate and pretty, and I was feeling quite confident at the time, training for a half marathon, so I thought the dress would look good on me, even with the cut out sides. I don’t often dress in a very femme way so wearing a dress like this is quite a novelty, making it extra exciting for summer.

Do you remember what you felt the moment you bought it?

Cheeky excitement at how it was a little risqué, but I thought I would look good. I was quietly confident and excited to see how it would look on my body in real life.

Do you consider it an impulsive buy or was it something you thought about for a while?

Definitely an impulse buy. I was making an ASOS order, which is something I haven’t done very often since, and I moved it to the basket without too much consideration.

Why haven’t you worn it?

It turned out my confidence wasn’t quite enough to allow me to wear this dress out. It fit me, I liked it a lot… but it is completely see-through. It was a shame, and the reason I didn’t send it back was because in every other way it was perfect. I wanted to wear it, I even went to M&S to buy nipple protectors so that I could try and make it work – but that just made it look silly and actually created more waste because I didn’t wear those either.

At some points I felt a bit angry about it. I felt teased with a nice dress, not realising how thin the fabric was. I thought it was unrealistic that anyone would wear it like that, so why did ASOS even bother making it.

I felt frustrated that it even mattered that people might see my nipples. They’re just nipples and it wouldn’t matter on a man. I looked at #freethenipple on Instagram and enraged myself further. The campaign was in a peak at the time and through it I was learning about the female body, social media censorship, sexualisation and the male gaze. In the end, I couldn’t part ways with the dress. It had gathered some meaning, even though I pretty much knew it would be never worn.

Have you had any moment in which you were about to wear it but then changed your mind?

Yes and no. I’ve tried it on alone a few times and had a conversation in my head where part of me is saying yes, this fits perfectly, you look good, but the other half is saying, but you won’t feel good when you go upstairs from your basement uni bedroom and your friends can see too much of you. There’s striving for feminism and there’s being comfortable, and I don’t really think my friends wanted to see my tits while having a beer in the park – so the dress stayed in the wardrobe.

How did you feel when you wore it for the photograph shown here?

I haven’t tried it on for years, so I was happy to see it still fits. We’re in the depths of winter at the moment, so it was a nice reminder that warmer days will come. I liked how it looked, even with the thin material and cut out sides which I thought might make me feel overly on show. However I still feel that the confidence in this dress is something I would only feel in private.

I like how these pictures will be seen by someone because it gives the dress some purpose. However, they are pictures where the quality is limited, and I have control over how I am seen. Wearing this dress out in public would be a whole other kettle of fish.

If you haven’t worn it, why haven’t you given it away for recycling or to be worn by someone else?

I never even thought about giving this one away. I doubt many people would be able to get past the transparency of the dress, but mainly I haven’t let go of it because I am a bit attached. I still think it’s very pretty, and a tiny part of me maybe thought one day I’d find a way of making it work.

Do you think you will start wearing it after answering these questions?

I definitely think I should make a decision about keeping it or not. It’s a bit ridiculous to keep a piece of clothing you have no intention of wearing, just because you like the idea of it. Or is it?

What other garments from your closet have you never worn?

I’m not sure I’ve ever worn my school leavers hoodie since the day I got it. I have two, one from when I was 16 years old and another from being 18. Having one at the grand age of 24 feels a bit strange. Having two feels completely unnecessary. But still I’m so torn over when it might be appropriate to throw them away. Maybe I should do the purge sooner rather than later. Or maybe I’ll let them take up space in a drawer in my childhood bedroom for a couple more years, just to reduce that weird guilt.

What will you do next time you go shopping to prevent a similar situation happening again?

My clothes habits have changed a lot since that impulsive ASOS order. It was probably actually one of my last. Since 2019 I have boycotted almost all fast fashion, only slipping up for sports bras, a pair of yoga leggings, a couple packs of pants and once or twice, some sexy lingerie. Everything else has been second-hand from Depop or vintage stores. I’ve been trying to minimise my wardrobe rather than buying excessively and I usually consider how much wear I am going to get from something before I buy it. Thinking of the way my mentality towards what I really need and what is excess, I am pretty confident that items like this wouldn’t slip and fall into the checkout basket again. I still love a girly summer dress – but next time I think about buying one, I will try to make sure it actually gets worn.